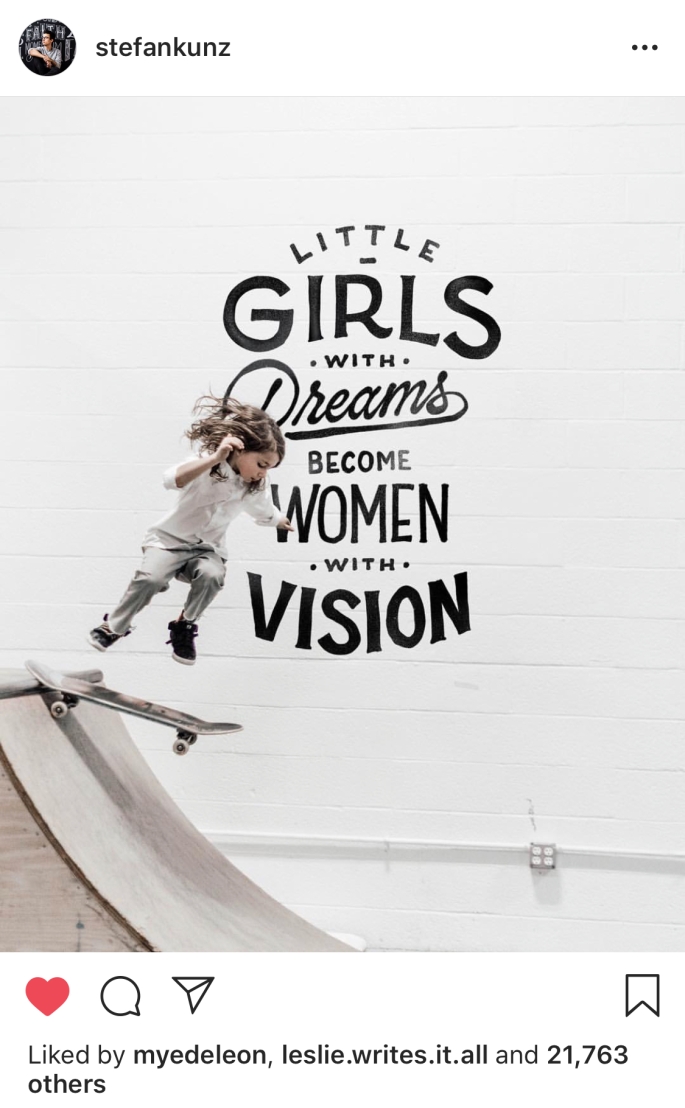 Lettering was my gateway into graphic design. I started out making greeting cards, home decor, and wedding signage before deciding on majoring in Media Design in college. Naturally, I follow 30+ lettering artists on social media platforms, such as Instagram, with their skills and popularity ranging from beginner to expert. One of my absolute favorite lettering artists is Stefan Kunz, master of chalk art and tablet lettering. Check out his work here or look at some of my favorites below! 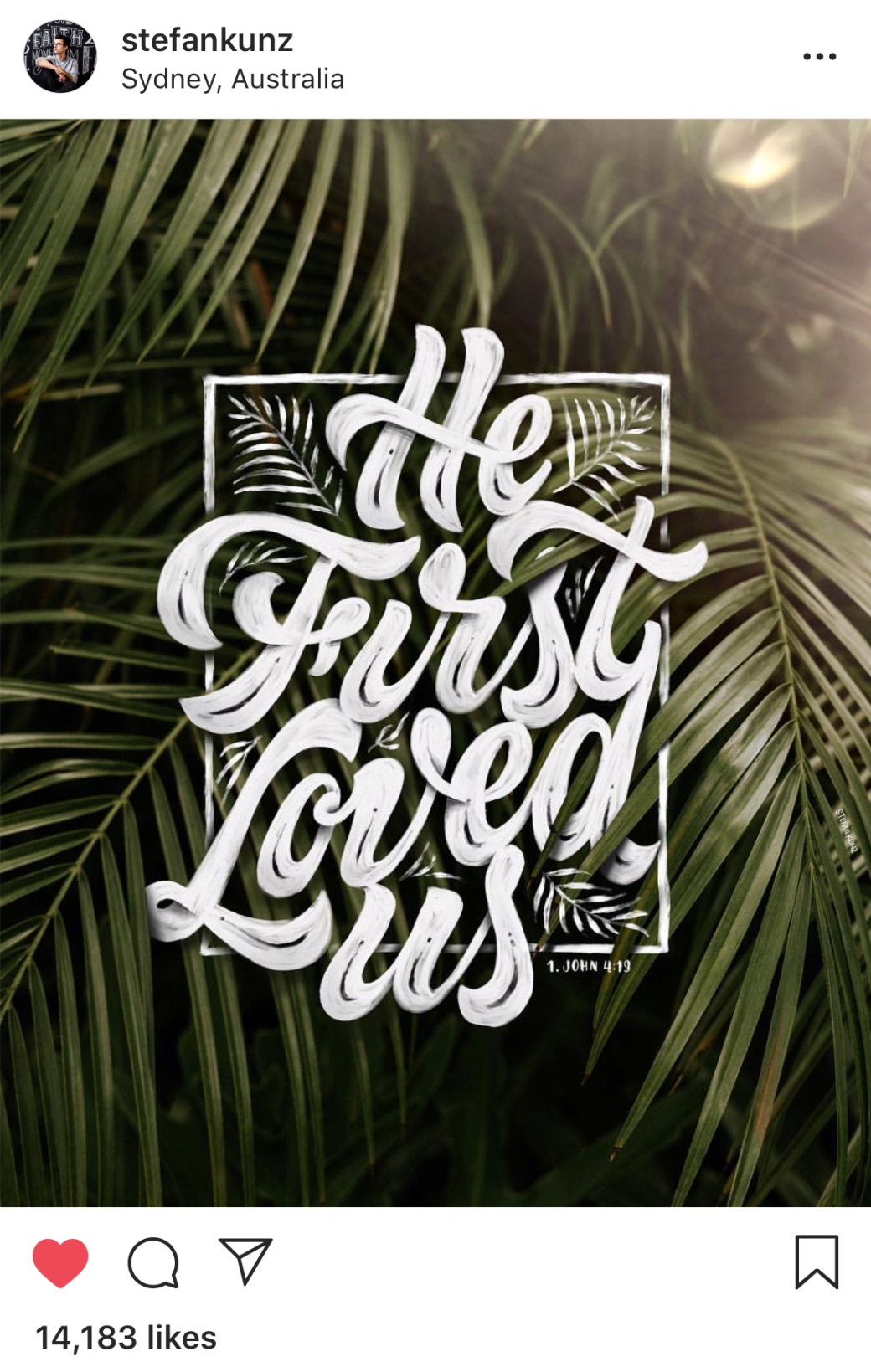 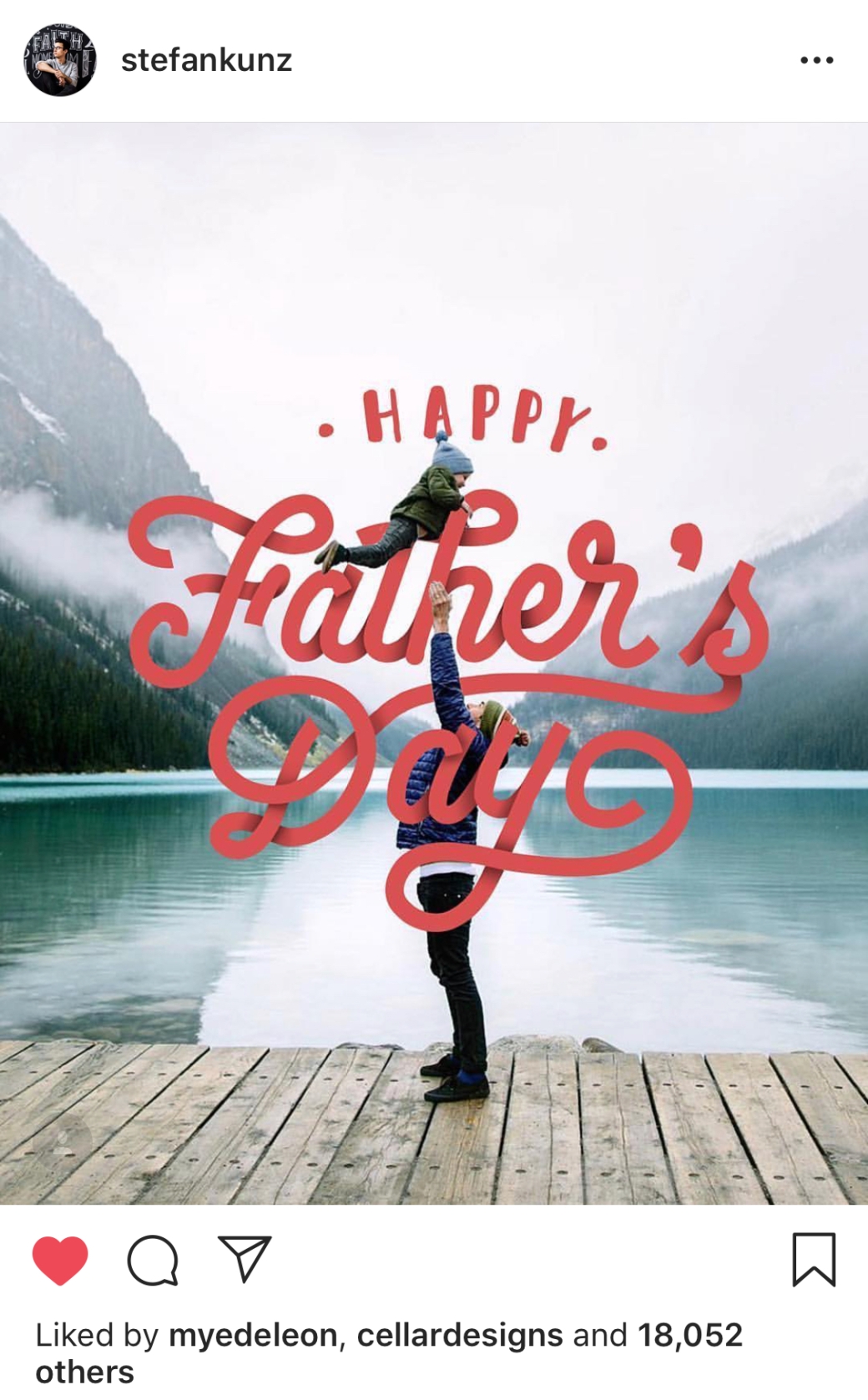 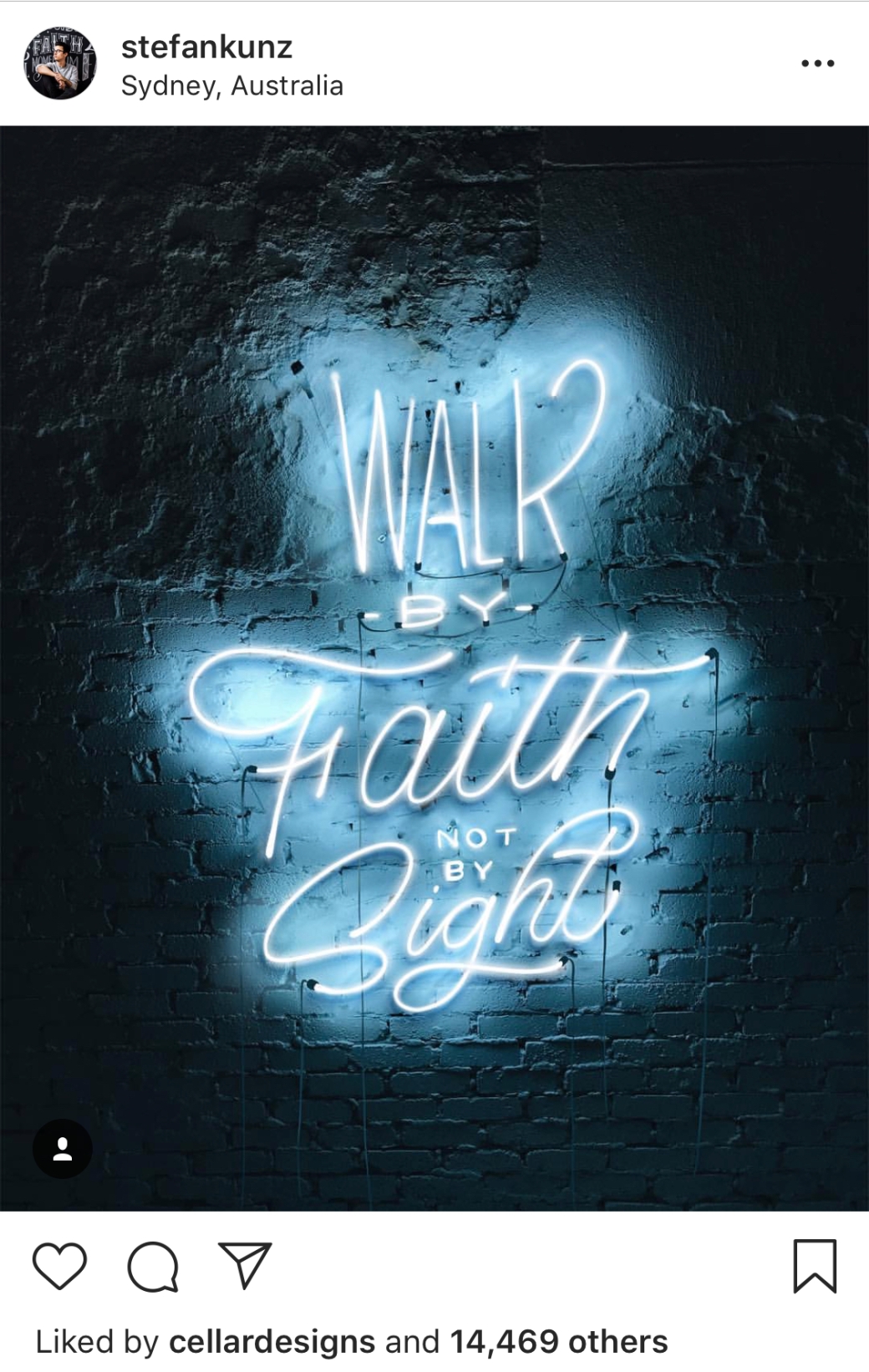 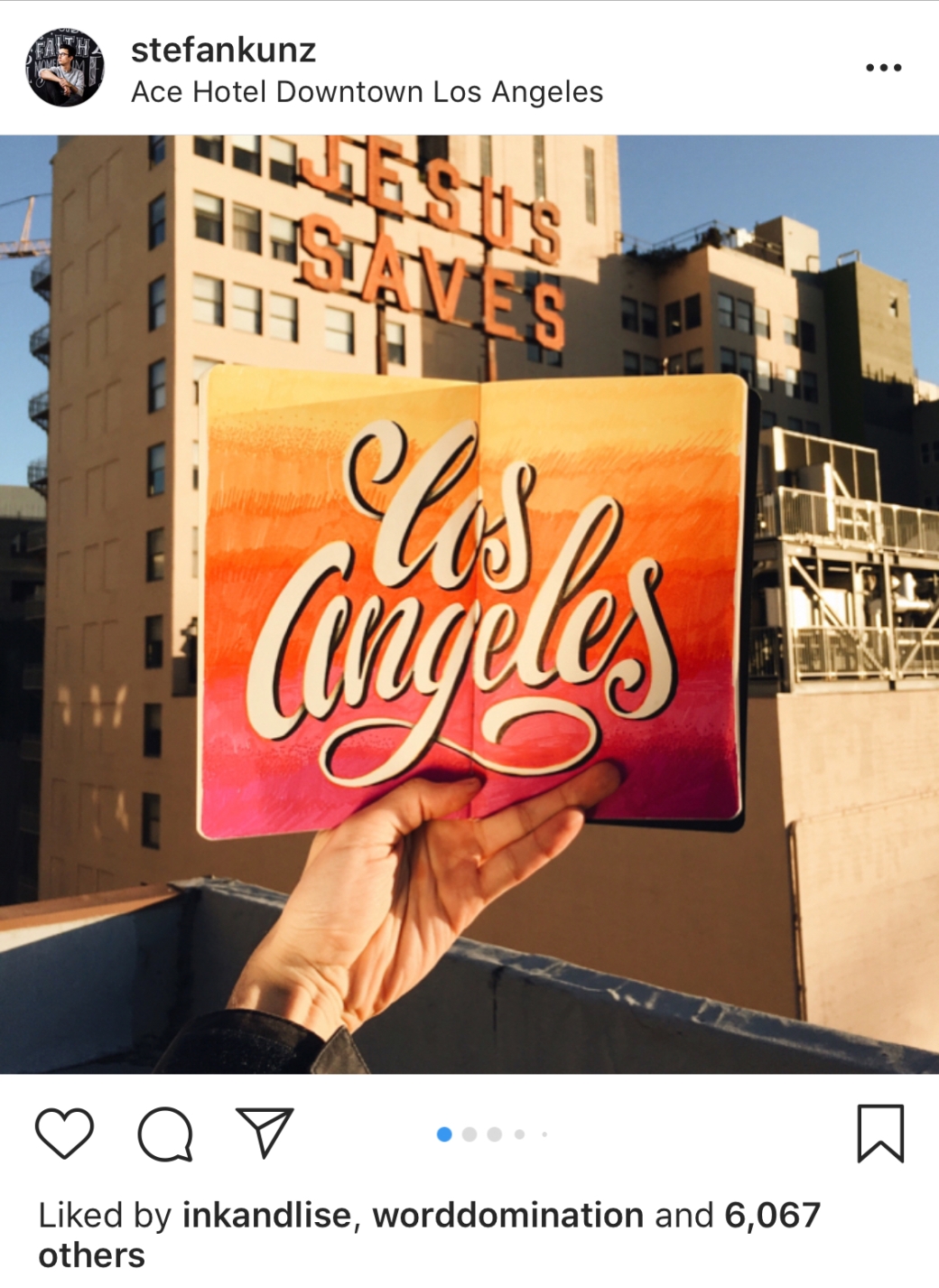 Perception is the way our brain processes senses, creating meanings for them.
Here are six different types of processing:
1. Top-Down; based upon what we already know. What allows us to recognize someone we haven’t seen for awhile, but we know we know them based upon the memory we have in our brain.
2. Bottom-Up; zero guidance from any prior knowledge.
3. Binocular; when we use both eyes.
4. Monocular; when we base things off the perception of just one eye.
5. Gestalt Approach; view things in whole form, (perceiving things is easier when done this way).
6. Feature Detection Theory; the recognition when we see visual formations, such as shapes and colors.

Another type, of perception is Subliminal Perception, messages that are processed at our subconscious or our unconscious level of our brain. James Vickery did the most affective way; he would put messages in quick breaks during movies like “drink Coca Cola” or “eat popcorn” to test whether or not it would increase sales. It did show that it increased sales, but his experiment wasn’t done correctly, so you can’t really use his data.

The five forms of sensation are vision, hearing, taste, smell, and touch. Let’s dive deeper into how each one works.

Vision, associated with your eyes.
– The Cornea is the outside surface of the eye, if this is damaged you will be unable to see clearly. Next comes the Iris, which is the colored part of the eye, and the pupil, which appears black and is actually an opening that allows light in. Then is the lens, which focuses the light that is allowed in onto the retina, which is on the back of the eye and holds the rods and the cones. Rods allow us to see black and white, and cones allow us to see color.
– Magnetic spectrum; visible light is a very small portion of the spectrum that we see, it’s influenced by the wavelength (indicator of the color, or the hue, of an object) and the amplitude (indicate the brightness of an object) of the light. (Purity will dictate the saturation of an object.) Primary colors of light are red green and blue.
– Dark adaptation takes longer than light adaptation. Dark adaptation, our eyes adapting to a dark surface, will typically take anywhere from 30 to 45 minutes. Light adaptation will take us about one minute.

Hearing, associated with your ears.
– The outer ear, sometimes referred to as the pinna, is where you would find the lobe, which funnels the sound inward around us. The middle ear contains 3 structures to it: the hammer, the anvil, and the stirrup. The inner ear contains structures such as the cochlea and the basilar membrane.

Taste, associated with your tongue.
– Taste is another name for gustation. Our taste buds pick up tastes such as bitter, sweet, salty, and sour. Our taste buds are actually between the white bumps, the white bumps are called the papillae. Fun fact: the mouth and the tongue is one of the fastest healing parts of the body.

Smell, associated with your nose.
– The formal sense of smell is called olfaction. We can detect and differentiate between about 500,000 different smells. And by name, we can name about 10,000 different smells. Although we have the capacity to recognize a lot of smells, this is the sensory organ that is least understood by researchers.
– Pheromones are chemicals that are linked to sometimes to hormones and mate selection in animals.

A few more senses: Kinethesis is what allows us to know the location of our limbs in relation to space. Vesitbular is our sense is our sense of balance.